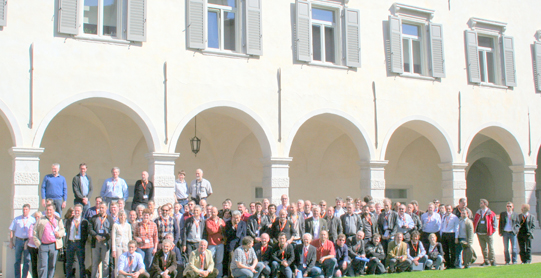 The SPISE 4 Workshop took place in Lana, South Tyrol, on 27 to 29.03.2012. More than 100 participants from 29 European countries took part.The Workshop was organised by the SPISE Working Group (SWG), to which representatives from Belgium, France, Italy, the Netherlands and Germany belong (Chairman: Dr.-Ing. H. Ganzelmeier).

The Workshop began with a round table session, where a representative from the Commission (A. Rotteveel) presented the opinion and expectations of DG Sanco. Further speakers reported on the national plan of action (Prof. Freier, DE) and on previous experience with plant protection equipment inspections and their implementation in the Member States (J. van Wenum, NL; Dr. Waldner, IT; H. Wehmann, DE). The involvement of the representative from DG Sanco is also seen as a sign of recognition for the work done by SPISE.

The subject matter for the sessions resulted from the sections of Article 8 of Directive 2009/128/EC:
•    Session 1: Inspections at regular intervals – Inspection of new equipment
•    Session 2: Member States may apply different timetables and inspection intervals with exceptions following a risk assessment and exempt handheld pesticide application equipment or knapsack sprayers
•    Session 3: The inspections shall verify that pesticide application equipment satisfies the relevant requirements
•    Session 4: Member States shall establish certificate systems for mutual recognition of the certificates

In addition, two further sessions were included:
•    Session 5: Training
•    After Dinner Speech: Are sprayer calibration, adjustment related to the canopy structure and drift reducing technology added values for orchard/wine growers
Contributions from the participants included 10 posters which presented ongoing activities in the Member States and the current situation regarding the introduction of plant protection equipment in the MS.

The After Dinner Speech was geared around becoming acquainted with the technical inspection of air-assisted sprayers developed by the South Tyrolean Extension Service for Fruit- and Wine growing in Lana, which provides for instructions on calibration and adjustment for each individual piece of inspected equipment. The visit to a testing workshop for air assisted sprayers in Auer, where the scope of and the practical procedure for the technical inspection were introduced and then explained, pursued the same aim.

The question is whether it makes sense and would be practical to integrate one or several tools from the Extension Service into the compulsory inspection which takes place at regular intervals according to Article 8 (and must be carried out according to the harmonised EN standards throughout the Member States) as an addition and on the request of growers.

On the second day an excursion took place to a company called Lochmann in Vilpian (a well-known manufacturer of air assisted sprayers for fruit growing and viticulture), to research centres in San Michele (presentation of research results on drift reducing technology) and Laimburg (demonstration of air assisted sprayers particularly suited to slopes in viticulture) as well as to a testing workshop of the Extension Service in Auer. In Auer, the technical inspection of an air assisted sprayer was shown using local testing facilities. In an orchard nearby, the spray pattern from the equipment which had been adjusted could be viewed.

The participants were able to gather information on the wide range available from an exhibition of testing facilities by manufacturers from Belgium, Germany and Italy.

Many matters could be discussed and some of them clarified during the Workshop. However, many issues remained unsolved. These are to be brought together in Technical Working Groups and specified further.

The main issues include:
- How to deal with minor defects/brand new sprayers?
- Define a certificate system for mutual recognition
- Define a simplified quality assurances system
- Define a common risk assessment procedure for excluding PAE from the inspections
- Define a procedure for calibration, sprayer adjustment and drift reducing technology as added values
- Collect from MS available training material and make it downloadable on SPISE website
- Develop a SPISE database relevant for monitoring, mutual recognition …

This also shows the effort made by the participants to not only discuss matters, but to also be actively involved in establishing procedures for equipment inspections. In this way technical criteria and procedures within SPISE will be concretised and proposed which contribute to a uniform approach in the MS and concerning mutual recognition.

The survey on the state of equipment inspections in the MS as carried out before each SPISE Workshop and consequently also in the run-up to SPISE 4 shows considerable progress compared to the results from 2009:

The amount of plant protection equipment inspected in 2011 in the EU (all MS) increased from 230,000 to 300,000. The intervals set by the MS between inspections are 1 to 5 years.Up to now, 16 MS have made use of the exceptional cases according to Article 8.3 of Directive 2009/128/EC and have exempted certain equipment from the inspection or have set different inspection intervals for this. According to notifications from the MS, there are now obviously less items of plant protection equipment. There were less field sprayers in 2011 (1.25 million) compared to 2009 (1.3 million). Air assisted sprayers followed the same trend during this period from 980.000 to 950.000.
The excellent preparation and organisation of the Workshop by the Extension Service in Lana should be noted, and also the constructive and committed attitude to SPISE.

The chairman of the SPISE Working Group, Dr.-Ing. Heinz Ganzelmeier, on whose initiative the SPISE was founded and who was head of the four Workshops, has now passed on this task to Professor Balsari of Turin University (who has also been a member of the organisational team since 2004) since Dr. Ganzelmeier will be retiring at the end of this year.

The proceedings of the SPISE4 workshop will be printed and available as soon as possible.

This article is already 14984 Once seen.