The inspection of sprayers, which means the periodic inspection of sprayers in use, was the theme of the first European workshop, which took place at the Federal Biological Research Centre for Agriculture and Forestry (BBA) in Braunschweig from 27 to 29 April 2004. The basis for the workshop was the publication of a European norm at the beginning of last year, in which the technical requirements for the inspection of field crop sprayers and air-assisted sprayers for bush and tree crop was determined for the whole of Europe. This is seen as an important component in the harmonisation of sprayer inspections in Europe.

The President of the BBA, Dr. Georg F. Backhaus, and the head of Plant Protection Department at the Ministry of Consumer Protection, Food and Agriculture (BMVEL), Dr. Petzold, opened the workshop and in doing so, emphasised the significance of this issue and this European initiative of the BBA. The Commission was also represented and presented its views with regard to possible ways of governing sprayers. The technical part of the Workshop was introduced by two keynotes, presented by Mr. Liegeois on the subject of "Thematic strategy on the sustainable use of pesticides: an action plan to improve good plant protection practices throughout Europe“ and Dr. Ganzelmeier on "European Standard EN 13790, the basis for sprayer inspections in Europe".

Mr. Liegeois emphasised in his presentation that the Commission has also included a number of measures for improving sprayer technology in the context of its environmental protection strategy. A first meeting of experts took place at the end of March 2004 in Brussels on aerial applications in the Member States. The SPISE workshop can be seen as the first European forum for exchanging experience and discussing measures for inspecting sprayers throughout Europe, and co-ordinating these in the future.

Dr. Ganzelmeier explained the first European standard EN 13790: work was started on this in the CEN/TC144 in 1997. It was published in the spring of 2003. First of all, this standard states, amongst other things, the following:

Over the past few years, the inspection of sprayers already in use has been introduced in various Member States and candidate countries. This development has been supported by public concern about possible hazards, and efforts to reduce the amount of plant protection products used. The three most important reasons for the inspection are

In order to make the use of plant protection products in European agricultural production safe, requirements and test methods for the inspection of sprayers already in use must be determined. This is a step further in the same direction following the standardisation of requirements for new sprayers relevant to environmental protection. Furthermore, it is stated that sprayers can be inspected on a voluntary basis, but also as an obligatory inspection. In both cases, detailed official or legal agreements are necessary on, for example, the implementation of inspections, the authorisation of places allowed to carry out inspections, the intervals between inspections, and so on. This European standard now determines requirements and methods for inspecting sprayers which are already in use. Through visual inspections, performance tests and by carrying out measurements, compliance with the specified requirements can be examined. A total of about 40 different requirements are stated which have to be tested during the inspection and recorded in the inspection report.

According to Germany, there is merely one issue, regarding the measurement of the evenness of transverse distribution from field sprayers, which is not yet governed clearly. Two different test methods are still allowed: in addition to a cross-distribution test bench (patternator), the assessment of flow rate using individual nozzle measurements is allowed. The future will show whether the acknowledged equality of both methods works. 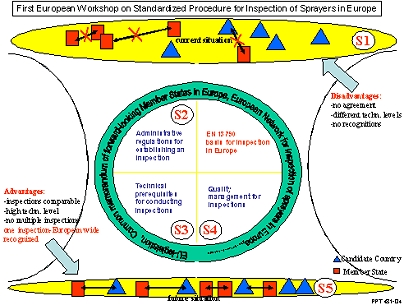 As already mentioned, this standard does not govern all aspects of the sprayer inspection. More extensive administrative regulations (S 2), technical prerequisites (S 3) and a quality assurance system (S 4) are needed, fig. 2. To be able to implement these associative measures in a binding form in all Member States and candidate countries when appropriate, further superordinate rules and regulations are necessary. This could be in the way of a binding legal regulation in the EU or a voluntary commitment of the Member States and candidate countries (memorandum, network). The following sections were therefore arranged as follows: 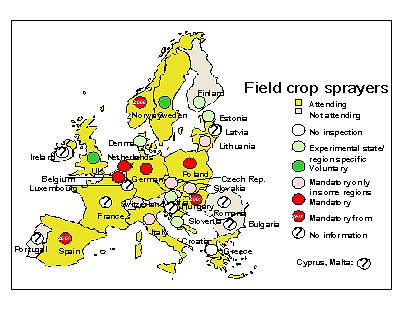 In addition, the annual inspections deviate clearly from one another, even in countries which have already introduced obligatory inspections, fig. 4. 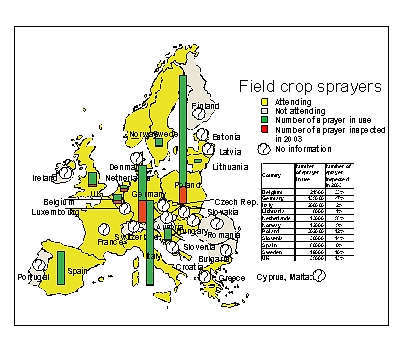 The presentations were complemented by posters, an exhibition of test facilities from European manufacturers/distributors in and around the testing hall of the Division for Application Techniques, and an excursion to approved inspection workshops.

The results of the SPISE-Workshop can be summarised as follows:


The exchange of information between Member States / candidate countries is also seen as very important and should therefore be developed further.
The quality of the inspection is determined mainly by the inspection workshop, the authorised inspection personnel and the monitoring system for approved workshops. Only a few Member States have introduced a quality assurance system (e.g. accreditation in accordance with EN 45004).

The Member States/ candidate countries therefore see an urgent need for regulating (exchange of information) quality assurance, training inspection personnel and checking the testing equipment.
At present, several individual regulations exist in the different countries, which allow mutual recognition on a bilateral level (e.g. D / NL, B / NL).
An important prerequisite for the mutual acceptance of sprayer inspections is that EN 13790 is implemented throughout the whole of the EU. A sprayer inspection for the whole of the EU should therefore only be introduced on the basis of EN 13790.
Representatives from the Member States / candidate countries also endorse the implementation of EN 12761, which contains the requirements for new plant protection equipment.
Furthermore, representatives from the Member States / candidate countries endorse the implementation of a "European Steering Committee" to support the harmonisation of the sprayer inspection and to safeguard conditions of competition. Action is seen as necessary in the following areas:

In addition, the compilation of guidelines / instructions on the mutual recognition of inspections between Member States / candidate countries is encouraged.
Finally, the main conclusions of the SPISE-Workshop are emphasised in a joint resolution:

This article is already 13059 Once seen.